The material provided here is extracted from the ebook 52 Process Safety Moments. .

A contractor was dewatering a 10 mile section of pipe after a hydrostatic test. He was using a foam pig that was pushed along by compressed air to displace the water. The water was removed from a 12" bypass line.

The pig got stuck somewhere in the line it was decided to increase the pressure on the upstream side of the pig to 400 psig (28 barg). Downstream of the restriction the line was open, as shown. The differential force on the pig was almost 0.5 million pounds (2,200 kilonewtons). With that kind of force behind it the pig was going to move — it had no choice in the matter. 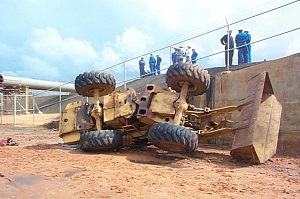 There are two process safety lessons that can be drawn from this incident.

The first is to do with the hazards associated with the use of compressed gas (in this case, air). Compressed gas contains a large amount of energy. In this example, the energy was enough to cause the considerable damage shown. There are examples of leaks from compressed gas cylinders that launch the cylinder as if discharged from a gun.

The second lesson to be learned from this incident is more positive. The fact that they had cleared the area of people meant that no one was injured. The book Process Risk and Reliability Management quotes Trevor Kletz, “If a tank’s not there, it can’t leak.” As discussed in Safety Moment #2: Common Process Hazards — Static Electricity this statement can be modified to, “If a person’s not there, he can’t be killed.” Indeed, the only way of achieving perfect safety is to remove people from the location of the hazard. (Safety Moment #48: What to Do? illustrates the same point.)

The YouTube video link shown at the bottom of this page discusses this incident in greater detail.