This ebook provides an overview of the offshore oil and gas industry. Covered are the types of operation, the history of safety in the industry and the organization of an offshore facility.

The book Offshore Safety Management refers to the ‘Offshore Oil and Gas Industry’. But, in fact, there are really three quite distinct industries that differ from one another in fundamental ways. They are: Drilling, Production and Pipelines.

The development of formal safety management systems for offshore oil and gas facilities can be said to have started with the Piper Alpha catastrophe that occurred in 1988. Offshore platforms had had safety programs before that time, of course, usually built around Safety Cases. But Piper Alpha ushered in a new and much more thorough approach to system safety.

Following the accident, an investigation was conducted by a committee headed by the Scottish High Court judge, Lord Cullen. The committee’s report was highly critical of the safety programs that had been in place in North Sea facilities prior to the accident.

In response to the Cullen report the offshore industry took two different tracks, as shown in the sketch. Companies operating in the North Sea (and, later on, other areas of the world such as Australia) continued with the safety case approach, as shown in the bottom track of the sketch, but radically improved the thoroughness and quality of the technical analyses and put in place more stringent measures to ensure that the recommended measures were implemented. 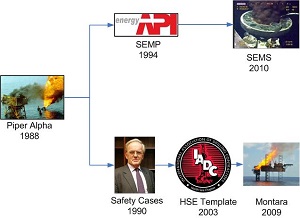