The words ‘siting’ and ‘layout’ are often used interchangeably, but, strictly speaking, they have different meanings. Siting is concerned with the location of a facility. For example, if a company is planning on building a new chemical plant its management may consider the relative merits of sites in Texas, Mexico or China. Layout, on the other hand, is to do with the locations of equipment, piping and buildings at the selected site and how they connect with one another. 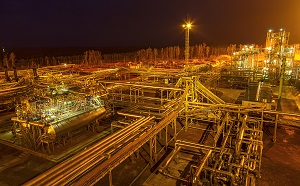 The layout of operating units, equipment, buildings and roads is critically important for safe and efficient operation of the facility. A good layout is the most effective means of preventing an incident from escalating. It also provides good access for emergency response services.

It is necessary to pay close attention to this topic in the early stages of a project because, once the major items have been installed, it is difficult and expensive to relocate them. This means that there needs to be close coordination between all the engineering disciplines as well as construction, operations, maintenance and HSE (Health, Safety and Environmental). A 3-D model of the facility (and/or isometric drawings) should be created as early as possible during the design. This gives everyone involved an opportunity to ‘walk through’ the facility as if they were operating and maintaining it.

The layout of equipment at a facility is developed in stages. The first stage is to decide where the major operating units are located. Then the location of equipment within those units is determined. For example, in on oil refinery the relative locations of major units such as the Cat Cracker, Alkylation and Boiler House will be considered first. Following this the location of individual equipment items such as distillation columns, heat exchangers and fired heaters can be made. Requirements for vehicle and personnel traffic, security, emergency evacuation, firefighting and access for maintenance, operation and workovers also need to be considered along with the proper positioning of emergency shutdown and depressuring valves, ventilation inlets and outlets, cranes, engine air intakes and exhausts, vents, fired heaters, control rooms, offices, living quarters and maintenance equipment.

Although most layout decisions are made during the initial design phase, the topic also needs to be considered when making facility modifications, particularly when new equipment or piping is being added.

One of the most important layout decisions is to identify those activities and functions that can be moved away from the hazardous area altogether. For example, one refinery purchased a disused school building that was located about 1 km from the facility. They then moved most of their administrative functions into that building. Doing so created some inconvenience and expense. But it did mean that, were there to be an explosion or fire the people in that building would be safe.

Once safety and environmental issues have been addressed equipment spacing should be organized so as to minimize the expense of the intermediate piping and valving, particularly when expensive alloys are being used. 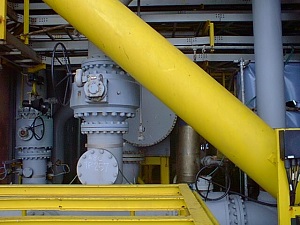 In general, keeping items well away from one another improves safety for the following reasons:

The following general comments and guidance apply to the layout of equipment within process facilities once the major operating units have been located. (Due to the lack of space on a platform or drilling rig, the layout of offshore facilities may not be able to follow this guidance.)

Access to equipment and other layout issues affecting personnel can be optimized through the use of 3D models.

The sketch below shows how equipment and safety equipment (in this case a safety shower) can be laid out.

The sketch illustrates the following layout decisions to do with the safety shower.

There are many regulations, codes and standards to do with equipment spacing and layout. Examples are:

In addition, many companies have their own standards and guidance. The use of standards can be supplemented by vapor dispersion analysis and other types of modeling.

The information to do with siting and layout is provided in Chapter 2 of the book Plant Design and Operations, the ebook Siting and Layout , Safety Moment #35: Safety Shower Layout and Safety Moment #57: Equipment Spacing (Pumps/Fireproofed Pipe Racks).