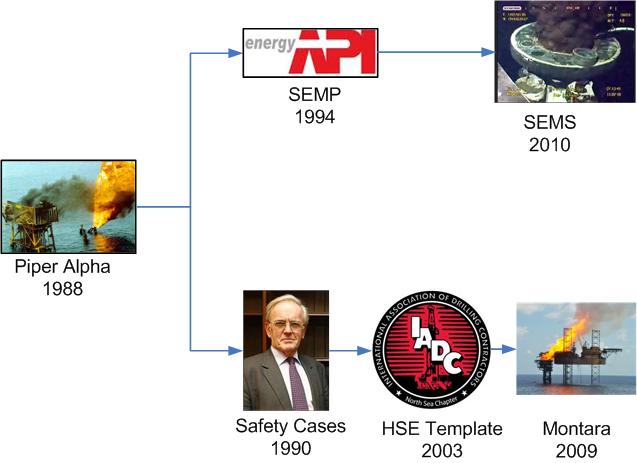 The development of formal safety management systems in the offshore oil and gas industry can be said to have started with the Piper Alpha catastrophe that occurred in 1988. Of course, companies working offshore had had safety programs before that time, but Piper Alpha can be viewed as being the starting point for the development of formal Safety Management Systems for offshore operations — world wide.

Following the accident, an investigation was conducted by a committee headed by the Scottish High Court judge, Lord Cullen. The committee’s report was highly critical of the safety programs that had been in place in North Sea facilities prior to the accident.

In response to the Cullen report the offshore industry took two different tracks, as illustrated in the drawing at the top of this page. Companies operating in the North Sea (and, later on, other areas of the world such as Australia) continued with the safety case approach, as shown in the bottom track of the sketch, but radically improved the thoroughness and quality of the documents and put in place more stringent measures to ensure that the recommended measures were actually implemented.

In the United States (principally the Gulf of Mexico) the response to the Piper Alpha incident was equally vigorous, but followed a different path. The American Petroleum Institute (API) developed their Recommended Practice 75 which recommended that offshore facilities develop a Safety and Environmental Program (SEMP). Like a safety case, RP 75 is non-prescriptive. However, it makes extensive reference to industry standards (mostly from the American Petroleum Institute), and so is perceived as being considerably more prescriptive then the safety case approach. Nor does RP 75 require that a formal assessment of acceptable risk (ALARP) be determined.

Articles and safety moments to do with the offshore oil and gas business are shown below.

This YouTube video shows an incident in which one man died and six others suffered lost-time injuries. Briefly, this is the time line.

If you fly over the offshore platform of the future in a helicopter and look down you will see just two living beings: an operator and a dog. The operator’s job is to feed the dog; the dog’s job is to make sure that the operator doesn’t touch anything.

This post is the third in a series in which we consider how our approach to industrial safety, and process safety in particular, may change in response to the COVID-19 pandemic. It is early days — no one knows what the ultimate health and economic effects of this frightening event will be. But it seems likely that we are entering a ‘New Normal’. So much has happened so quickly that it is hard to visualize how we can return to the ‘Old Normal’. All of us wish for a quick, V-shaped recession, after which the economy comes roaring back, more vibrant than ever.

If you fly over the offshore platform of the future in a helicopter and look down you will see just two living beings: an operator and a dog. The operator’s job is to feed the dog; the dog’s job is to make sure that the operator doesn’t touch anything.

This month is the 30 year anniversary of the Piper Alpha disaster. And, as to be expected, many people have published articles, blogs and web pages to do with that event, and the lessons that it continues to teach us. But there is an earlier maritime event which probably had a greater impact in its day than did Piper Alpha in ours. And that event was the sinking of the Titanic. (The image at the head of this post is actually of the Great Eastern, for reasons we discuss below.)

This article from the online journal The Hill makes some pointed criticisms to do with BSEE’s rolling back of regulations that were introduced following the Deepwater Horizon/Macondo explosion and fire. It states,

The Deepwater Horizon/Macondo catastrophe in the Gulf of Mexico (GoM) in the year 2010 demonstrated the need for new safety management regulations. The draft regulations went through various iterations, and the name of the responsible government agency changed twice. In the end, the SEMS (Safety and Environmental Management System) regulation became a requirement for offshore oil and gas operations in the United States.

As part of its Well Control Rule BSEE appears to have made a major change in the manner in which offshore risk is to be managed. Section 250.107(a)(3) states,

The SEMS rule applies to oil and gas operations in U.S. waters. It is administered by the Bureau of Safety and Environmental Enforcement (BSEE). The rule holds the facility accountable for the overall safety of the offshore facility, including ensuring that all contractors and subcontractors have safety policies and procedures in place that support the implementation of the operator's SEMS program and align with the principles of managing safety set forth in API RP 75.